First – if I could read 24/7 I honestly would. What a wonderful life that would be. Throw some of my fantastic family in when I need to get up and stretch and I would be completely happy. But since that’s not going to work, I try to get in as much reading like most people. Last year, 2019, my goal was to read 100 books and instead I read 200. I’m not sure if I can beat that this year but I’m sure going to try.

I’m kind of all over the place with my genres. My favorite is historical fiction. I’ll read just about anything though. Science fiction isn’t my preferred although I’ve found some pretty good books in that genre too, I’ve learned not to turn down anything. Give it a chance and I might be surprised. But I’m also not shy about stopping a book if it’s not doing it for me. Life’s way too short to read something that I’m not interested in. Except a classic… I’ll make myself read one of those even if its killing me.

More about my life outside books… I’ve been happily married to my husband, Greg, for almost 30 years. We met when I was only 18 years old and eloped (in Las Vegas) less than 2 months later. We had the 1st of our 4 kids the month after our 1st anniversary. By the time I was 23 I had 4 kids 5 years and under but loving every minute. The next decade or so was full of chaos but so much fun. Now our babies are all grown, 3 are married and we even have grandbabies. We’ve even “adopted” another daughter into our family so our family has grown even more.

Kristin is our oldest. She and her wonderful husband, Jared, are amazing parents to 2 of our grandkids. Gideon will be 2 in April and Naomi was just born last October. Their family lives a short drive away so we are so blessed to see them several times a week. I’m so looking forward to watching these sweet babies grow up.

Alex is married to our beautiful daughter-in-law Eva. He is our only one that moved away and boy did he move away. They live in France. Yes, the country of France. He met Eva online, and she is French. He loves it there too. He moved knowing no French at all but can now speak it fluently. (New immigrants in France are required to take language courses provided by the government. He even took an extra one to gain more proficiency.) I’d love for them to move back here one day… he says no, she’d love to, so we’ll see. In the meantime, it’s a lot of fun to visit them.

Nicole is married to sweet Josh. They’ve only been married a year so they’re still newlyweds. She actually met Josh through Alex – those two were friends. Our entire family worked on getting the 2 of them to go out because we knew they’d be perfect for each other. Obviously we were right. They moved to a cute little house just around the corner from us so they’re close but we don’t see them much. Nicole is a ballet dancer and is at the studio a lot. Mom brag – she danced professionally for a couple of years, and she’s danced in programs with Boston Ballet, Joffrey and a few others. She even did a tour in China with their National Ballet Company.

Our baby – who is now 22 years old, is Spencer. He’s still at home with us but I don’t think he’ll be here much longer. He’s finishing up his certification to do something with computers… he’s told me but I can’t ever remember. I do know it’s not programing though. Once he has that he’ll be able to make enough money to live on his own. He’s also got the sweetest girlfriend ever. He and Mari have been dating almost 5 years so she’s like part of our family now. He’s working full-time though and between that and Mari we don’t see him much. He tries to be here whenever the babies are here though if possible. He loves being an uncle.

Sarah is our “adopted” daughter. She and Kristin met in kindergarten and have been best friends ever since. She’s been like our daughter since the end of high school. She married a great guy a few years ago that she’s known over a decade. She and CJ have the cutest little guy, Clark with a headful of the blondest hair. They have their own business of dog training and they are incredible at it. And I’m not just saying that because of my insane love for them. They really are good. Check out Intelligent K9 Training in San Diego. They are on Insta, YouTube, and have a Website.

What do I like to do outside of my family and books? Not much. No really… We live in Southern California so we are usually at Disneyland like once a week. I also love decorating my house and refurbishing furniture. Sometimes though my favorite thing to do is snuggle up on the couch with 3 little people under a blanket and watch a Disney movie = my happy place. 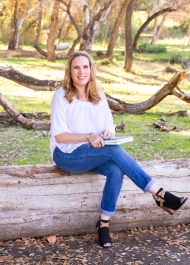 I’m a wife, mom, and grammy. And life long lover of reading. Travel along with me while I visit distant lands, eras, and families. ~ Mandy ~